POPULAR SIGHTS OF THE ISLAND OF SAMUI

Samui has become popular with tourists not so long ago. Back in the early 1970's. the island, as, indeed, the whole of Thailand, was a forgotten corner of the earth. Foreigners did not come here, and the local population engaged in fishing, growing coconuts and hevea, worshiping the Buddha. The tourist boom begins in the 1990s.

The main goal of tourists was a dozen sandy beaches, which made it possible to contemplate the horizon of the Gulf of Thailand more than at reasonable prices. But not only is the island famous for its beaches. Sights of Samui is the unique nature of the island, the traditional way of life of the indigenous people, as well as numerous temple complexes.

Two waterfalls Na Muang, if you visit them right after the rainy season, represent a unique show (on a photo of Na Muang 1). The water rushing from 18-meter height, thanks to thresholds, is divided into thin streams threads. In the dry season the waterfalls dry up. There are waterfalls Na Muang on both sides of the Safari Park. Before the second one, you should go up 1.5 km on foot or get there by using the services of local jeeps.

The Hin Lat waterfall is similar to the first Na Muang. The road to it is a whole adventure in the jungle. It is located in the western part of the island (near Nathon) on the Lipa Yai River. The road to it begins at the homonymous church, runs along rough terrain and takes about half an hour in one direction. Along the way, you can study the local flora, swim, and walk along the secret paths near the waterfall. 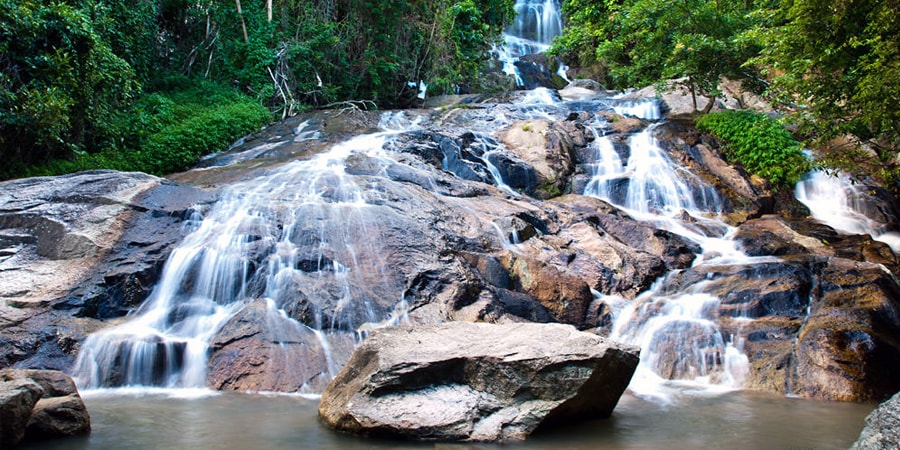 Detailed article about waterfalls on Samui and map There are many rivers on the island. There is a waterfall on each of them, on some - several. From the temple of Wat Khunaram, located on Highway 4169, the road leads to the Tar Nim waterfall. This is a long excursion and you can not do without a map. The path passes through the Garden of Buddha, it is possible to evaluate several small waterfalls, visit observation platforms and perform trekking on elephants. The passage to the waterfalls is free.

Hin Lat Waterfall on a map:

Another name is the Magic Garden of Tar Nim. The highest point of the island. The main exhibits in a garden – stone statues of Buddha which there is a lot of here. The stone house, sculptures representing people and animals – everything was made hands of the local resident Nym Tkhongsuk. Peculiar and interesting museum under the open sky. It is rare where you will see.The garden is also beautiful with its lush vegetation and waterfalls. 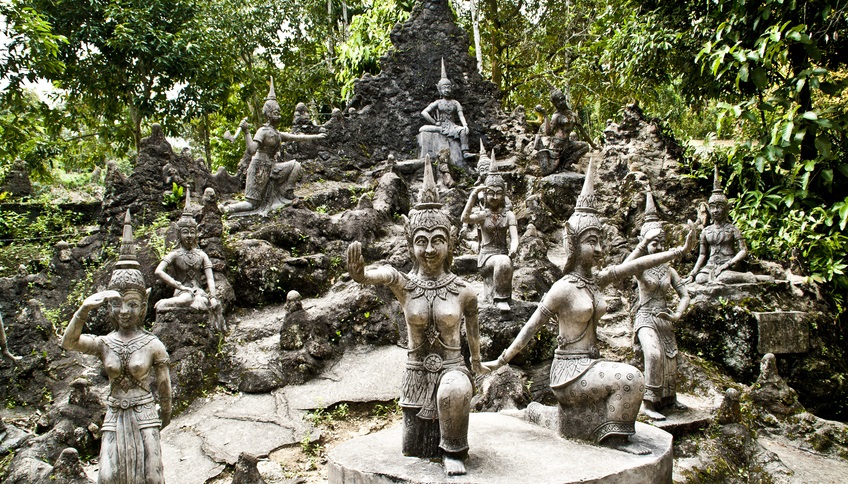 The national Safari park is a place for family leisure. Children will like walk on elephants, to a show with snakes and crocodiles. Adults can participate in rally on jeeps, on a trip around the jungle on ATVs, visit plantations of a hevea and a coconut, latex factory. 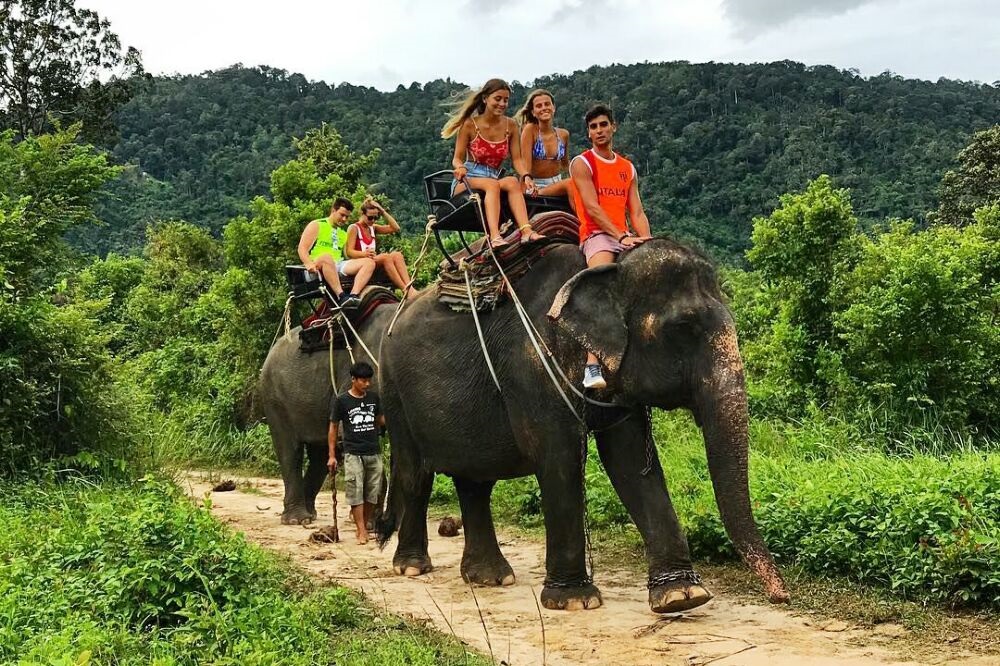 safari park on a map:

The park amazes everyone not only in size, but also untouched nature. The park includes more than 40 small uninhabited islets with caves, rocks, unique vegetation and birds. Shallow clear water allows you to practice diving. If you're lucky, you can make a photo of tropical fish.

The park is located 20 km to the north-west of the island towards the mainland of Thailand. Boats go with excursion programs from Natong, Maenama and Big Buddha  here. The trip will cost about 2000 baht ($ 58).

Is worth it to spend the whole day, considering flowers and trees, doing a photo of birds and animals who contain in the conditions close to natural. Also there is a pool overlooking the sea, entertainments for the youngest and numerous restaurants. 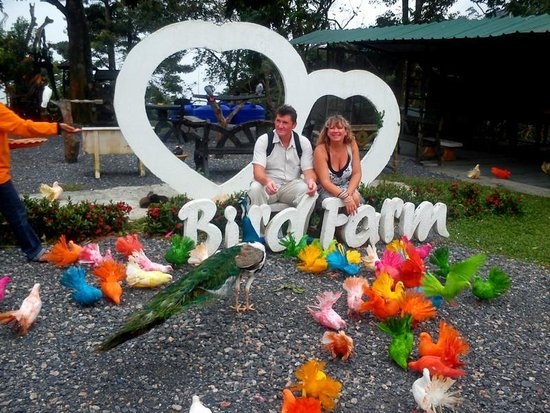 It is recommended to visit together, because - you can see on the map - are not far from each other. In the aquarium are shown unusual fish, different inhabitants of the sea depths, sharks. Just behind the aquarium is a small zoo with Bengal tigers, leopards, monkeys and exotic birds. As in mainland Thailand, the Samui Zoo is not quite the usual for a Westerner. Here, not only observethe life of animals. 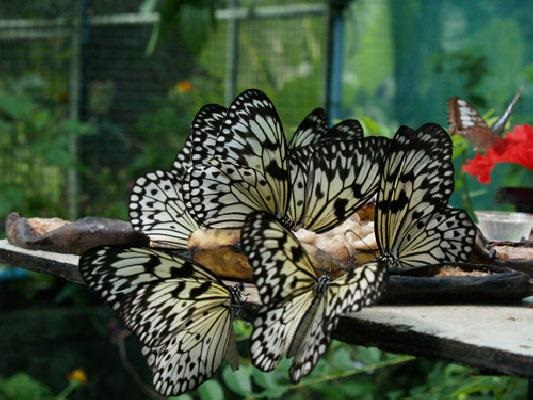 Visitors are shown the show with their participation, you can be photographed in obnimki with monkeys, feed the animals. After walking 10 minutes along the asphalt street to the south you can visit the Butterfly Garden on Samui. The entrance ticket to each park is from 150 baht (4.5 $). Parks are located on Laem-Set Road in the south-eastern part of Samui. It can be accessed from Highway 4170.

In the east of the island, near the Huatanon beach, many forget about magnificent hotels on the coast, having fallen under the slight charm of the traditional Samui settlement. . Here it is possible to get acquainted with culture and life of locals, to see how life in the real Thailand slowly flows. It is excellent entertainment for those whom the ecotourism from an anthropological component interests. 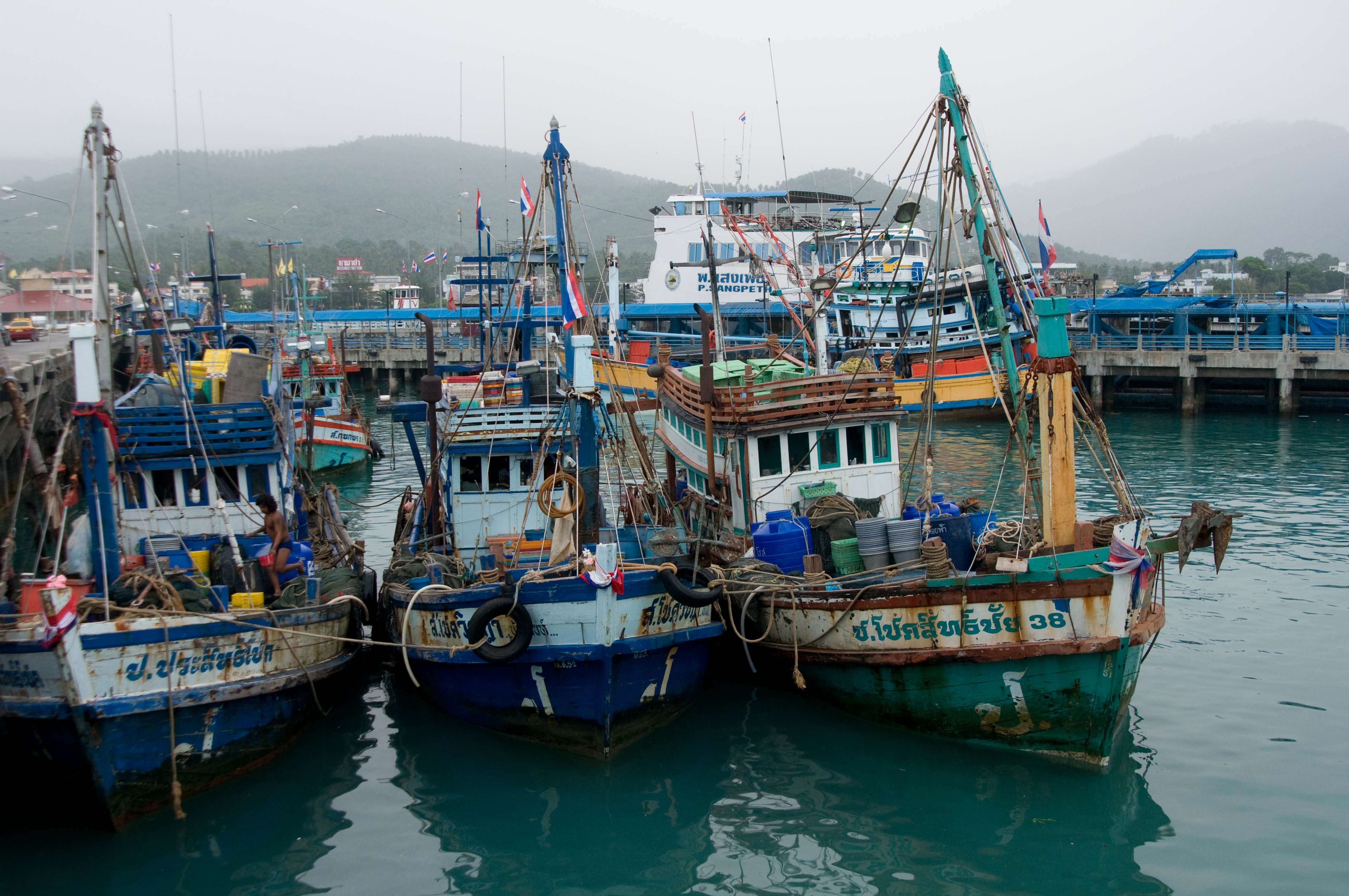 Thailand – the Buddhist country. It is enough to dart a glance at the tourist map and to be convinced that there is a lot of temples to Samui. An entrance to them free, but donations are welcomed. It is necessary to follow the dress code:   cover open parts of a body, avoid indecent inscriptions and images on clothes, take off shoes at the entrance to the temples.

Is a well-known landmark of Thailand and the central temple complex of Samui, a photo of which has long been a visiting card of the island. Here not only numerous tourists come for impressions, but also locals — for a prayer and calm. 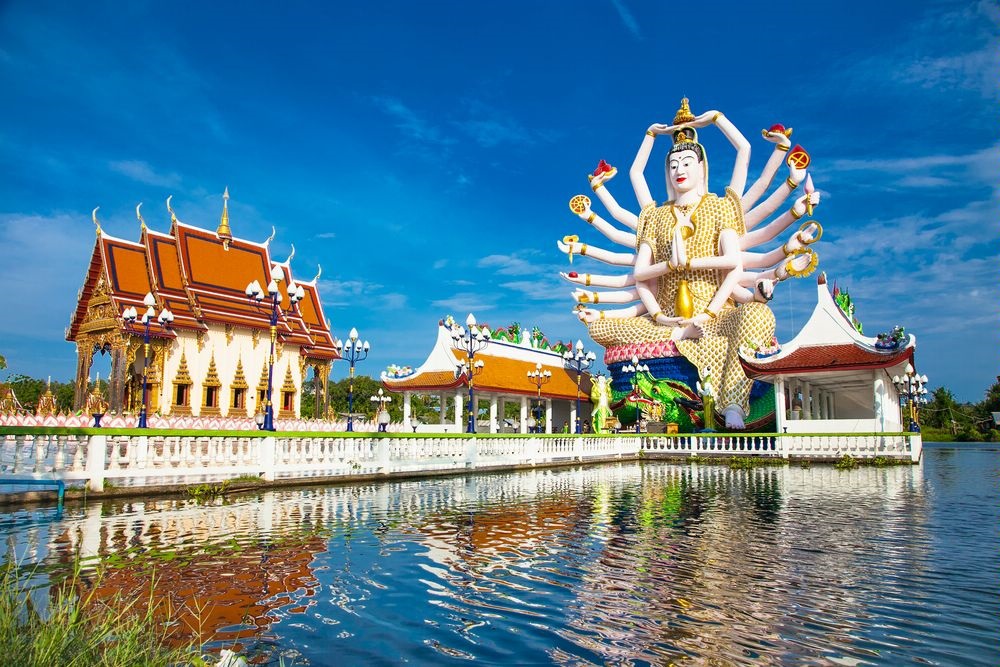 The main attraction of the temple - a real mummy monk, allegedly deceased in 1976, and put up for everyone in a glass sarcophagus. The temple will draw attention with golden shine and the well-groomed territory. Location: on the road 4169 on the left, if you go to the west.

Wat Khunaram on a map:

This sanctuary of Buddha is called still the Gold temple (in plans — to build the white temple nearby). The pagoda is made in traditional Thai technique and is of interest from the point of view of architecture and sculpture.  Here it is possible to make the best photos which will impress with contrast of the bright blue sky and gold temple on its background. 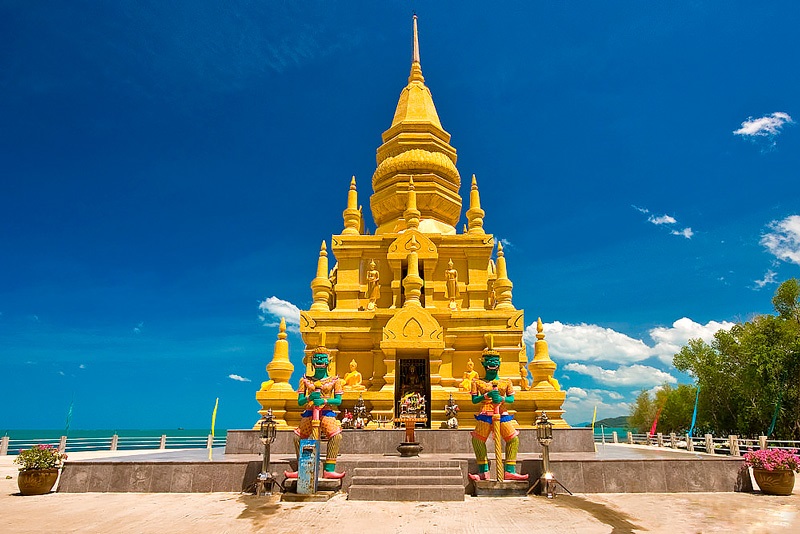 The interior is simple and laconic: it is the operating temple in which monks come from other regions of Thailand.  Next to the pagoda in good condition is a park for meditation.  Tourists have an opportunity to visit him, to sit down and reflect on something. Location: the southern tip of the island, follow on the road 4170, turn on Lam-Sho Road and further to the coast.

The temple, located in the south of the island, is not marked in guidebooks and tourist maps, so there is almost never a superfluous people here. Modest interior, small rooms, no gilding and the like of jewelry. But behind external unattractiveness lies an important religious shrine - the oldest Buddha statue on the island, and, possibly, in all of Thailand. 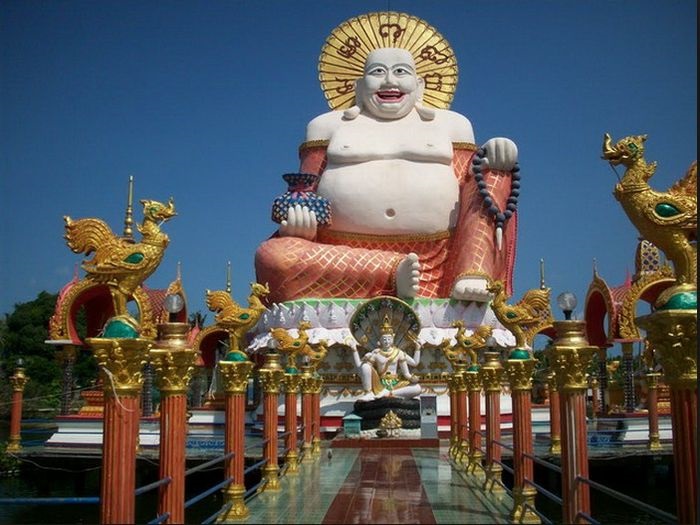 She is in a separate room, surrounded by images of other deities. Here you can learn about the life of monks, see religious rites and rituals. Location: Proo-Na-Muang Road, from the road 4169 turn left, if you go to the west.

The temple complex was initially created with the purpose to become a new tourist attraction. Buildings are issued in bright colors – make an impression on tourists and well turn out on a photo. The temple is in the northeast of the island and is surrounded with the lake from all directions. Fish from the lake are caught and cooked, exchanging it for the donations of visitors.

As far as it corresponds to Buddhist canons – a big question, but the temple somehow needs to contain. The main attraction is the huge statue with 18 hand of Guanyin towering on height of the seven-story house. In the Chinese option of the Buddhism Guanyin – god of mercy and compassion. Many on ignorance believe that it is Buddha's image. The temple is functioning, not only tourists come here, but also believing islands. Location: between highway 4171 and Tongsai Road.

The considered sights don't exhaust the list of interesting places to Samui. There are aquaparks, a snake farm, golf club, very interesting stone masterpiece called as stones the grandfather and the grandmother to Samui and many other things. The number of temples and statues Budd is estimated in tens, including Big Buddha who is known in Thailand to everyone.

Wat Plai Laem on a map: